The Shozy V33 was supplied by Shozy for the purpose of this shootout. I have received no compensation. The views expressed are my own.

With regards to unboxing, I was sent these in a ziplock style plastic baggy with the tips in a padded envelope before the final packaging was finalised, so I can’t comment on what it feels like to unbox these. I can comment on the packaging, though, because I’ve got some pictures from Charles at Shozy. 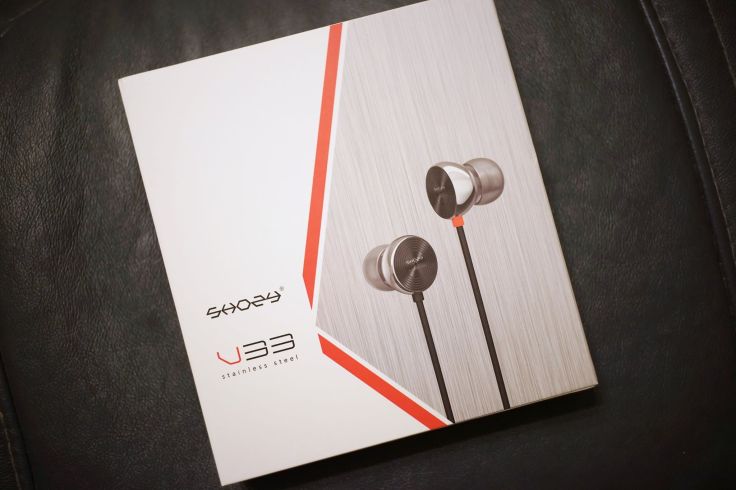 Outer box looks good with a nice printing, all the appropriate certifications and a good description of the features of the IEM. What Charles told me is they like making IEMs that are actually worth what they sell them for, rather than overcharging just because they can. The reality in many single dynamic drivers coming out of Asia is that the markup can be in the 1000s of percentiles. Shozy is throwing down a graphene coated driver (pure graphene drivers aren’t actually out there, as far as I know), with good material and build quality all around. The build quality on these is better than what I see on the HiFiMAN RE800, which is a single dynamic driver that retails for $299. The HiFiMAN comes with better packaging and an inexpensive case, but the build is overall better on the Shozy V33. 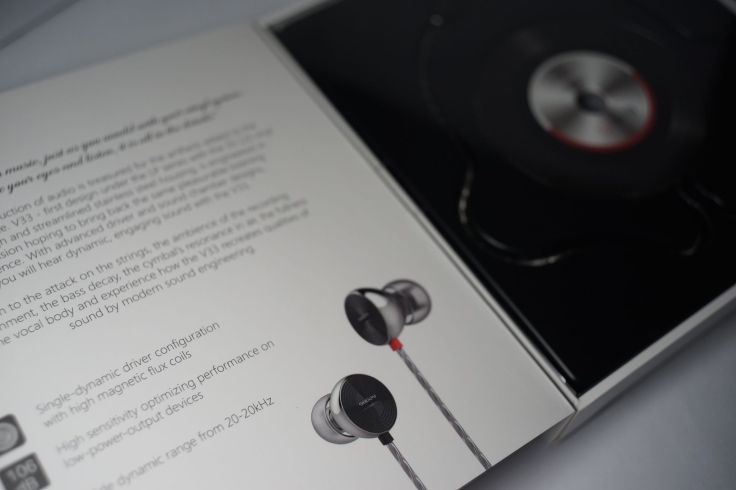 The inside of the box is to a high retail standard. These would look at home on the shelf in your local electronics store (Curry’s in the UK, Best Buy in the USA). The inside of the box has good description and decoration. The IEMs rest in a blown plastic shell, which I’d rather see as a paper insert because blown plastic isn’t environmentally friendly. The tips are behind. The inside looks cool. I’d trade swish print quality and the decorative vinyl aspects for a case, but I’m probably an outlier when talking about marketing to the public.

Some things to note, the grooves on the Shozy V33 look, well, groovy. The grooves are prone to dust and other detritus getting into them. I have a daughter, and a red fleck of glitter got on them that I had to use an IEM brush and an alcohol wipe to get out of the groove.

The stainless steel on these has a very nice polish and feels like a good thickness. The y-split and the jack are made of the same quality stainless steel. While feeling solid, they don’t feel heavy in the ear and with the tapering of the body should fit most ears comfortably. These come with a stainless steel chin slider that is a nice feature minimising cable microphonics, which already aren’t a problem due to the lightweight cable.

The cable is thin and plasticky looking, but is made of high grade copper according to the box. It’s not detachable, so I can’t test. I’d imagine it is no less or better sounding than most other cables. I’d also imagine it is no more or less durable than other fixed cables.

As usual the listening here was done with the best DAP under $250, the HiBy R3. Get one.

These are bloody excellent at under $50. The mids are clear with appropriate placement of vocals. These aren’t your common v-shape. These drip with emotion on Damien Rice – Accidental Babies (16/44). His vocals are loaded with character and texture, and the piano accompaniment is delicate but powerful.

On Of Montreal – Heimdalsgate Like a Promethean Curse (16/44), has a rolling synth drum beat at the beginning with that rolls along with loads of definition on the V33. This track is poppy as hell and the V33 delivers all the energy you could want. These are energetic in ears. The track is loaded with variable synth textures and the V33 nails the texture at this price range.

Led Zeppelin – D’yer Mak’er (24-96 vinyl rip) captures the chugging bass on the track with beautiful clarity. The tuning, while energetic, doesn’t feel like it has overexposed any particular area of the spectrum.

The stage has good width on Roger Waters – Picture That (24-48). The sound is very clear with all the driving elements moving well. The London Underground announcements are clear with every syllable definable. The menacing feel of the track is well conveyed, and when the track turns from anger to anger mixed with despair the female vocal harmony enforces this feeling well. If you are happy with the political situation in the USA or the UK and don’t want your view challenged, don’t listen to Roger Waters’ new album Is This The Life We Really Want. Otherwise, it’s a great frickin’ album that hearkens back to Amused To Death.

I often use Roger Waters – Late Home Tonight, Part I as a test track. It has lots of instruments, difficult to resolve background elements, and a rare vertical pan of a missile being fired and killing civilians. The V33 do a fantastic job layering the stage with strings suspended behind the backing choir and Roger Waters up front. When the scene in Tripoli blends in it starts behind Roger and zooms in to focus on the street music and further into the domestic scene with the TV playing in the background. Every element is well resolved and appropriately spaced. The trickiest part of the track is the vertical pan of the missile, which on the V33 is represented with good width, but without a tall stage, thus minimising the impact somewhat. The clarity in the mids is fabulous.

I really like these and am looking forward to figuring out where these place in my top 5 IEMs under $50.