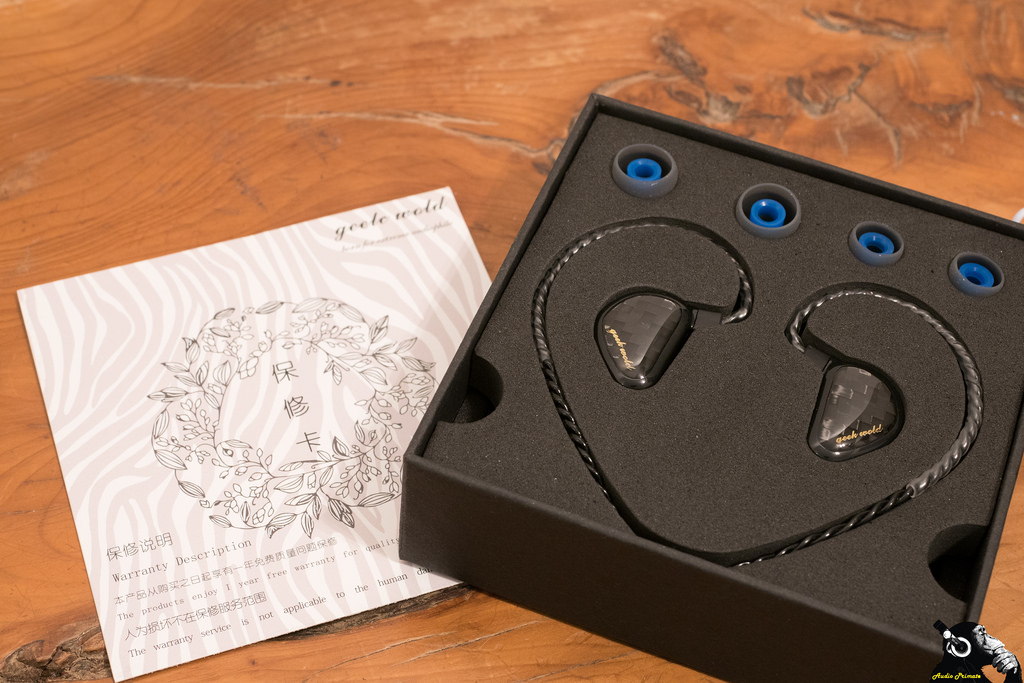 The Geek Wold GK3 was supplied by Penon Audio for the purpose of this shootout. I have not been compensated for this review. The views here are my own.

So the box is pretty standard. It’s got labels. It’s got an address. It’s got a poorly translate motto “born for extreme audiophiles.”

The back has specs. What! There are three dynamic drivers in this thing. That’s crazy talk. Does this mean they’ve used fancy crossovers like a 3 way floor mount speaker—heck no! This thing’s under $20…

I’m not hearing any fancy crossovers anyway. I think this is a small JBOD design (just a bunch of drivers).

The build on the Geek Wold GK3 looks pretty swish. It’s easily one of the better looking under $25 IEMs in the shootout. They’ve got a carbon fibre effect on the shell with classy gold writing. The cable is my favourite cheapie black plastic cable type: double-twist (it’s not a braid) with a pre-formed heat-shrink earguide.  The cable has good girth and weight and fits over the ear nicely. There is a good looking y-split and a 3.5mm right-angle plug with excellent strain relief. Not all is well in the Wold, though. Mine has a couple bits of exposed wire on the bottoms side of the y-split, so watch out for that. My guess would be that this part of the cable is assembled with heat that it shouldn’t be.

As usual, I used the HiBy R3 for listening. For this pair, I did a little bit of listening and then left them to burn in because there are 3 frickin’ dynamic drivers in here, it’s going to need burn in.

There is a thickness to the mids presentation while being disjointed on Animals As Leaders – Ka$cade. Almost everything sounds just a bit to a lot out of phase. The sound is flat with muddy bass up front and a veiled sound to the mids. Remember how I said I didn’t think there were any crossovers. The mess that is being made of this fairly technical metal track is evidence of that.

There is little depth and realism to the sound. On Rage Against the Machine – Killing in the Name the stage is narrow, the treble is tinny, and stage depth is disappointing.

Shifting to something a bit more poppy but impeccably recorded, I throw on Wilco – Summer Teeth. The GK3 does much better here. The mids are clear and mostly clean. There still isn’t much in the way of depth, but the stage width sounds a bit better. The whole sound is forward, which is notable on the singing birds and percussion instruments. I can groove to this.

What the fem? Tori Amos the fem. Tori Amos – Silent All These Years also sounds good. Moral of the story seems to be that fairly simple arrangements do alright with better ability to resolve the stage. Tori has a little extra weight on the track, which takes a little of the breathiness of her style away, but isn’t unpleasant (just not true to her tonality). These will probably do alright with a small jazz ensemble, provided they handle cymbals all right.

Mingus was a genius, ah um. Better Git It In Your Soul sounds pretty alright. Instruments are bundled up in a fairly tight space, but most of tonality is alright, it’s a little tilted towards stuffy. Part of that is the lack of air in the stage. Bass and piano have nice separation. Bass has good definition, while piano is a touch hard. Cymbals are doing okay here, just too forward in the stage for much feeling of realism. It’s fun, and will satisfy the wall of sound listener type. Lack of stage depth usually makes everything sound louder, and your average guy on the street with $20 likes it loud. These will have better sound than a lot of the options he’ll buy.

Okay, so these can do some bass down low on Unleash The Archers – Daughters Of Winterstone. The synth bass in the intro drops it heavy and deep and drums have some impact, though drums in the lower mids and upper midbass have short decay and some distortion. Britney Slay’s vocals sound a touch nasally and thick, more than usual. She’s got a bit of that going on in recordings—I wish I could see her live, because I bet it sounds better in person. As noted before, stage depth is a real weak point.

I’ve now been listening to these for about 2 hours and something weird has happened. The speakers warm up. They sound clearer the longer you listen to them. Weird. Stage depth is still limited, but mids and bass do improve. Speed keeps up on Infected Mushroom – Sa’eed and instruments track well with good impact on the drums. Sound is overall forward, but engaging.

There will be some who dig these at $20, but I think people will have mixed feelings.