Thank you Lear for providing this review sample in exchange for my honest opinion.

I took an interest in the BTC-01 as soon as Lear announced it on HeadFi. In the last year and a bit I’ve reviewed more Bluetooth headphones than I ever thought I’d even listen to. After all, Bluetooth sound quality is definitely exceeded by wired sound quality. When I enquired about reviewing the BTC-01, Apple hadn’t yet put out their 3.5mm jackless iPhone 7. I hadn’t yet panned them for ignoring all us audiophiles.

What I later realised was that Apple nailed their consumer use-case. They were way ahead of the game when it came to what their consumers wanted and how their consumers were using Apple devices with headphones. Most folks using their phone as a source (which is 95% of people) are using their headphones on the go or in the gym. These are not critical listening settings. Even if you have a highly resolving headphone or two, and I certainly do, when you are on a bus or train, or running on a treadmill, that resolution advantage doesn’t come into play as much. Bluetooth sounds good enough for most times for most people. I now find myself applauding Apple for their move on sheer business acumen.

If you walk down the street, you’ll see a crap-ton of people wearing Frankenstein’s monster costumes—big-ass Bluetooth IEMs sticking out of their ears of probably questionable quality. Headphones that may be from Beats, or may be random pieces of kit from a grocery store or high street shop that is genuinely clueless when it comes to sound quality. It is really hard to find Bluetooth in-ears that don’t look stupid, especially from Apple (Apple owns Beats).

While making these observations, I’ve also observed that the average consumer does know a really good headphone when they hear them. They just haven’t heard them. I love to share this hobby with strangers and friends, but most of them will still be listening to crappy Bluetooth headphones because wires suck for use on the move. The Lear BTC-01 gives people the option to listen to good headphones with a lightweight detachable cable with built in balanced amplification. With the BTC-01 the need for bulky Frankenstein Bluetooth in-ears disappears. This is why I was so interested in it and products like it (there are a few now).

The BTC-01 is lightweight, flexible and comes in almost as many connector varieties as you could possibly have. They even do connectors for rarities like FitEar. Nice. That said, I had problems with my particular connector choice, 2-pin standard CIEM (2-Pin CM in Lear ordering parlance). The pins are on the large side and will loosen any standard 2-pin jack you put them in. I tried with three top-tier brands: Noble, Empire Ears, and Vibro Labs. I was able to get the pins to go in all the way on the Vibro Labs Maya, but I felt uncomfortable the whole time. It was not possible to get the pins all the way into the Noble Kaiser Encore. I gave up in fear. I was able to get sound out, and it sounded truly excellent, but I wasn’t about to risk more than ¼ insertion. As soon as I put the pins at the entry on an Empire Ears IEM, I knew that the pins weren’t going in and stopped. These problems with pin fit were why this review has been delayed so long.

On principle, a cable review is a relatively simple thing: how does it feel, how does it sound. That’s it. This review has dealt with some roadblocks, and that is why I’ve bitten the bullet and bought the least expensive most-reputable 2-pin IEM I could find: the KZ ED12. I got it off of Amazon.co.uk for £12.78 with Prime shipping. The KZ ED12 is a steal—a mind-blowing steal. It’s an excellent panacea for people who don’t know they are suffering from good audio withdrawal. The KZ also had fit problems with the pins—but the information on pin size for the KZ headphones isn’t there. They might have smaller Ultimate Ears sized pins with a Unique Melody polarity. I had to use all my might to fully insert the pins—I wasn’t worried about killing a 12 quid IEM, there was still a little bit of room at the end. After trying 4 brands of IEM manufacturer and having pin fit issues with all of them, I’m inclined to conclude that the Lear 2-pin has too much girth. My recommendation would be for Lear to buy a pair of Eidolic 2-pin connectors, measure those, and then make all their 2-pins that size. I’ve found Eidolic 2-pins to fit all the ‘CIEM’ type headphones. Barring that, it may be advisable to get some weight-watchers and lay off the KFC. Maybe some Sweatin’ to the Oldies might be in order. It appears that all the jacks by major manufacturers have already made the trip to Slimming World.

I had no problems pairing the BTC-01 with most sources. I paired it with my ancient phone, my new phone (after old phone bricked), with several 3.5mm to Bluetooth dongles (Avantree Priva II is the best), my laptop, and the Echobox Explorer. Only the Echobox Explorer had problems. I’m inclined to think the source is the problem on this one, not the cable. The cable was also tested with an iPhone 7 when I let a friend use it with the KZ ED12. 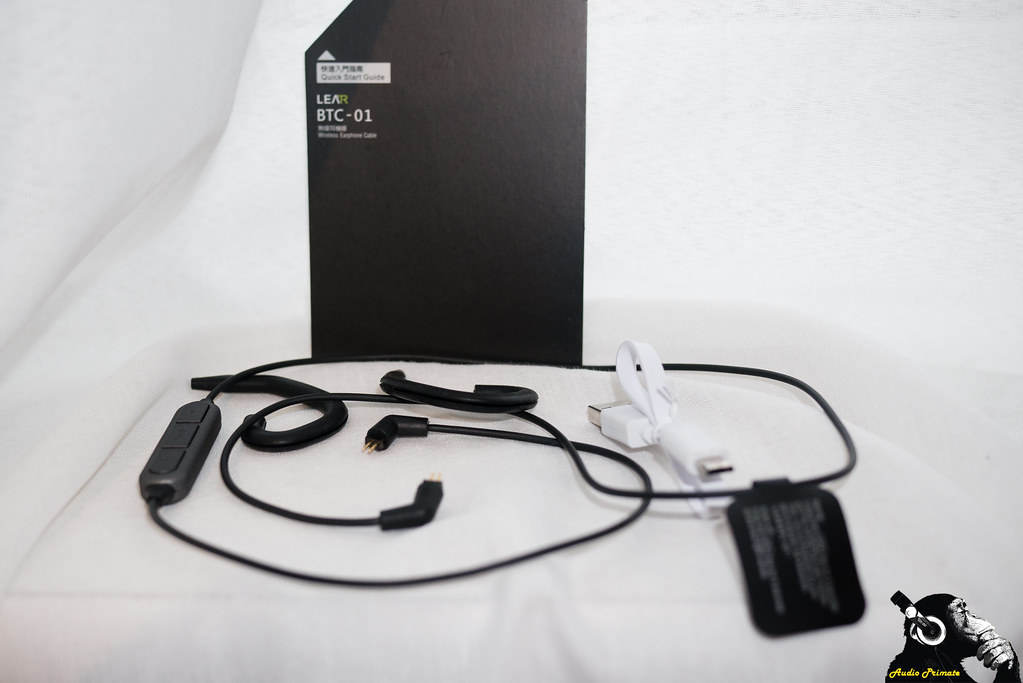 Something I have noted is that the range of a Bluetooth device is as dependent on the transmitter as the receiver. I think folks who make judgements against a Bluetooth headphone’s range should always make sure their source has adequate range characteristics before blaming the headphone. Almost all my Bluetooth sources have about a 8-10m unobstructed range. That is about the range that I got with the BTC-01. No problems with max range here.

I’m going to start by saying something about bitrates. There is basically no audible difference between standard aptX and well implemented SBC. I’ve tested this on multiple headphones with multiple transmitters. The major sound differences in Bluetooth are due to the DACs inbuilt on the chips and the amplification associated at the headphone end. I’ve never seen any manufacturer disclose what they use for amplification. Lear uses an SBC capable chip, but you can’t hear the difference between approximately 320mbps and 348mbps, I can almost guarantee that. It is a myth that aptX is CD-quality. There is a reason that advertisements for aptX only say CD-like quality.

So some things to note: I’ve not encountered perfectly silent background Bluetooth, Bluetooth is not as good as wired, and in the typical Bluetooth usage situation, neither of these matter. You can generally hear the noise floor during critical listening with any Bluetooth IEM. The BTC-01 also exhibits a noise floor, but it is softer than other IEMs. The amplification is cleaner, with no distortion at any volume. High quality Bluetooth headphones from 1MORE that I have reviewed do not have clean amplification up to higher volumes, the same has been true of other Bluetooth headphones I’ve reviewed. Distortion sets in fiercely at moderately high volumes on other Bluetooth headphones. When using the BTC-01, I didn’t experience this.

The BTC-01 provides the clearest Bluetooth experience I’ve yet had, and the fact that you can use the cable with high end headphones means that these will scale. I had brief listens with the Maya and the sound of the Maya was nicely preserved. I observed similar quality preservation with the Noble Kaiser Encore, but I couldn’t fully insert the pins, I gave up at ¼ in. It was not a good enough insertion to even photograph. The KZ ED12 sounded excellent with the BTC-01.

Some graphs from Lear:

As can be seen from the graphs, the output impedance is always under 1ohm, with lower impedances at lower frequencies but very linear output impedance for the most part. This should work well for almost all headphones as if we follow the rule of 8, headphones with an impedance of 7Ω or more should be compatible with no effect on the sound signature. Also in the graphs, we can see that the BTC-01 is tuned with a bit of a boosted high treble, this is likely responsible for the maintenance of an airy character in the sound. We can also see that the output power is higher than the referenced smart phone (unfortunately anonymous referenced smartphone). I would have like to know what the smartphone was, or to have a pool of averaged smartphone headphone outputs recorded with the models disclosed but only the average of all models shown—in this way there can be no perceived attack on any manufacturer’s headphone output.

Total harmonic distortion plus noise characteristics of the cable are good and fairly linear even under a heavy load. It is readily apparent that the BTC-01 handles load exceptionally well. What hasn’t been shown in the THD +N graph is what a typical Bluetooth headphone does when the volume is jacked up. From my experience, I would expect the distortion to be jacked up much higher, as it has been very audible and unpleasant on almost all Bluetooth headphones I’ve listened to. Given that people often will play their Bluetooth headphones loud, due to the listening environment that Bluetooth is used in, the stable amplification performance of the BTC-01 is very reassuring.

The BTC-01 is a very nice Bluetooth cable with clear sound and amplification that performs well under standard IEM loads. I had some significant problems with the pin size on the BTC-01 2-pin CM model, but I believe that this will be isolated to this size, is not all on Lear due to variance in the industry, and is easily remediable. For $65 plus shipping, I can certainly recommend it.

4 thoughts on “Lear BTC-01: a sound surprise in wireless”