Cons: Not very useful as pre-amp due to no remote control, not built for low impedance sensitive IEMs, input selection button is too sensitive, unemotional

Soundaware is a company that I first heard through their Esther digital audio player introduced in 2015, and they’ve been around for a bit before that. I saw them at my first ever Canjam London (2015), but didn’t think I could afford their Esther. I didn’t think I could afford anything then. I hadn’t gotten to HeadFi ‘sorry about your wallet’ status yet. It sounded pretty good, but my memory is remote. Their DAPs feature FPGA processing paired with DAC chips, which is a unique architecture, and after listening to their MR2Pro, I can honestly say it works to amazing effect. Their amps, well I know next to nothing.

According to the folks at Soundaware, the P1 has been making the rounds at shows for over a year, but they delayed release to try out another 20 prototypes to try to get it just right.

The P1 comes in an unassuming white box with grey pictures on it showing the amp. Inside you’ve got some foam with cutouts, a 6.3mm to 3.5mm adaptor, and a power cord. The padding inside is well distributed with plenty of protection. The amp comes in either silver gray (meh) or fancy blue (ooh)—those are SOUNDAWARE’s names for the colours.

The amp is heavy, and feels and looks well built. It’s compact, but weights almost 10 pounds. The screws are hidden from primary view on this little blue machine; they are on the bottom. There are visible lips where the top and bottom plates are joined to the side walls. Front and centre is a black screen that seems to only tell me what input I’m using. I think this screen is to match their source gear line-up, which are basically all network players. The black screen really isn’t necessary, but it does look good on the front. On that black screen there is a capacitive touch button that switches inputs: XLR, RCA, and SAW_Link are available. SAW_Link uses an HDMI connection to transmit analogue audio. To the right of the capacitive touch input selection button is the alps volume pot. It has a good firm feel to it, but it’s proximity to the input selection button means it’s easy to switch inputs accidentally when using your left hand to adjust volume. Up above the volume knob is a metal switch for choosing whether headphone amp or pre-amplifier mode is engaged. On the top of the amp is a shadowy black window with some sort of design on it that showcases red LEDs placed on the amp circuit board. If my memory is right, red LED cause the least interference with audio, but I still wonder why they are even necessary. The amp slides a little bit on it’s hard plastic feet when a headphone is removed from the front. Heavier or grippier feet would improve stability, maybe metal clad rubber?

All in all, the amp has everything you’d want to access on the front, except one thing. It doesn’t have a remote control functionality, so you’ll have to get off your sofa every time you want to switch the input, or adjust the volume, which isn’t enjoyable for a pre-amplifier. At least you can switch tracks and such if you are running their MR1 or a SAW_Link box with one of their other SAW_Link equipped players, like the M2Pro SOUNDAWARE sent with this demo unit. The pair up is probably pretty cool, but the red M2Pro sitting on my desk didn’t come with a SAW_Link box, so I have not tested out the pre-amp function with my speakers. Missed opportunity, SOUNDAWARE. 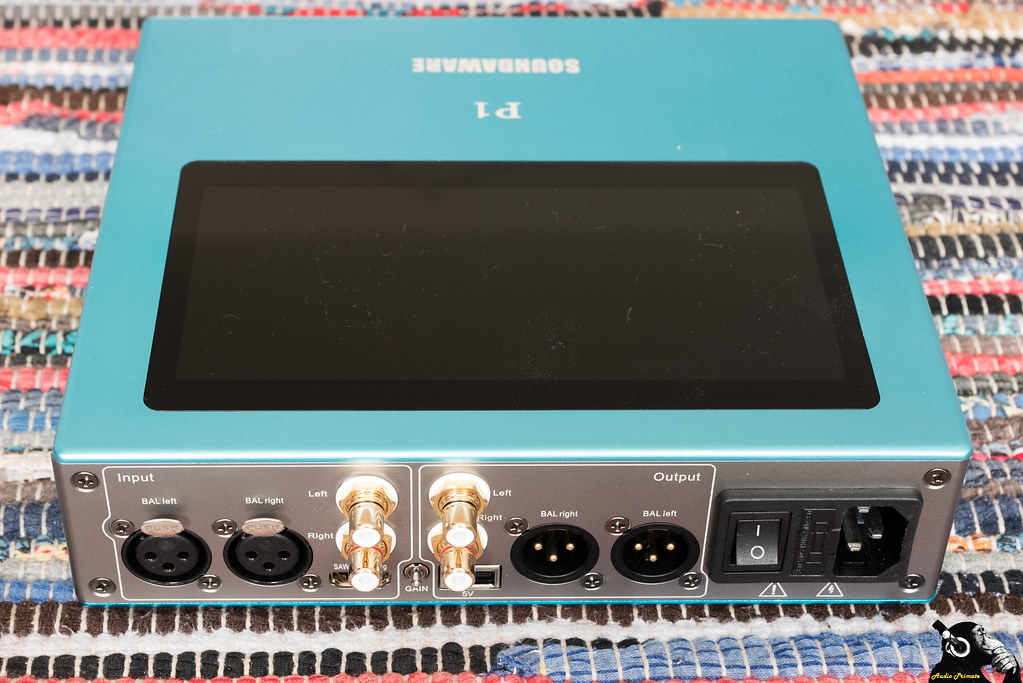 The back is laden with goodies: balanced inputs and outputs to go with single-ended inputs and outputs, a USB linear power supply designed to provide 800mA of clean power to USB devices hooked up to the P1, and the SAW_Link connector for single-cable balanced analogue audio input from other Soundaware devices. There is also a gain switch to go from super high power down to more normal power.

I tested the Soundaware P1 with a variety of IEMs and full-size headphones ranging from the super sensitive and hiss prone Noble Encore IEM, all the way up to the beastly amplification requiring HiFiMAN Susvara. It did not do well with the Noble Encore, it hissed loudly and had some frequency response alteration that made the Encore sound more muffled. Attaching an iFi iEMatch fixed the hiss for me, but even in low gain the amp is probably a bit too powerful for the Noble Encore. IEMs like the Ultimate Ears Pro Reference Remastered have high enough impedance to play alright, but it really takes nothing for this thing to get loud. I mean look at these friggin’ power specs.

To adequately drive the Sennheiser HD600 in low gain mode, I only need a quarter of the volume control. This beast is really made for super demanding cans. The HiFiMAN HE-1000 v2 didn’t even present a challenge for the P1. I was using the Questyle CMA600i as my source in unity gain, which actually means there was a lot of extra headroom just from that, but even if the CMA600i pre-amplification of the headphone amp is turned down, it’s still loud as hell. The HiFiMAN Susvara doesn’t even need 50% of the volume knob. Over 5 watts into 30Ω will do that for ya.

I’m just going to go straight to the comparisons, because that is basically where the guts of this amp will show. Let’s have a duel.

Maybe not that one. Stephen Spielberg really has come along way in his career.

For this duel, I’ll be using what is probably the best production headphone on the planet, the HiFiMAN Susvara. The signal chains are as follows:

Both the SOUNDAWARE P1 and the XIAUDIO Formula S effortlessly drive the Susvara effectively. There is no lack of power or representation of the frequency spectrum, but the tonal and technical characteristics are not exactly the same.

On Michael Jackson – Billie Jean the Formula S has wider soundstage and a little more soulful presentation. The P1 has a harder edge to it but it also resolves the deep stage a little clearer. Treble is sharper on the P1, but I do not prefer this characteristic.

The P1 shows fantastical technical finesse and power when tuning in to the multi-layered instrumentals and potent drumming on Billy Cobham – Quadrant 4. The spatial resolution is pretty special on depth when paired with the Susvara. Speed is also excellent. There isn’t a lost note or instrument location anywhere in this composition and even in the busiest parts the amp and the Susvara keep up. It is technically excellent. At the same time, there the sound can feel a bit piecemeal rather than like a natural performance. When switching to the Formula S, the sound is more natural and keeps up just as well technically, the portrait painted is more integrated. Rather than a collection of musical elements, I get a scene. I think the Formula S may be a tiny bit less detailed, but it is more satisfying.

Oh the Formula S / Susvara pairing soars with Kim Deal’s backing vocals on The Pixies – Where is My Mind. It’s toe tapping head bobbing sing-along playing air drums good fun. On this track, the P1 comes off as a little more forward, probably due to it’s emphatic upper mids and treble. I just don’t get the same case of the feels from the P1. I hear everything, but it just doesn’t move me like the Formula S.

Spinning up the MFSL CD version of John Lennon – Imagine on the P1 is really beautiful. The sound is in general forward, with well represented strings. John Lennon’s voice and piano sound clean. I’d say that the overall presentation of the P1 is clean. It isn’t sterile, but it doesn’t pack incredible emotional impact, either.

The SOUNDAWARE P1 doesn’t beat the Formula S in the setup I’ve got hooked up, but it didn’t disappoint at half the price of the Formula S.

When listening, I was struck by the idea that a warmer sounding headphone like the Meze 99 Neo could be an ideal pairing. A brief test, did indeed show this to be true. The P1 has the Meze 99 Neo performing like a champ listening through Fleetwood Mac – Rumours. Every little string pluck really stands out in Never Coming Back Again. The scale on Dreams is remarkable. It has the circa $300 Mezes playing significantly above that level. I didn’t get any channel imbalance at the very low volume required for the 99 Neo. For warmer sounding headphones, the colder sound of the P1 can be balanced and it’s technical aspects are really highlighted. There are loads of warm cans out there. This would probably be a good pairing with some offerings from ZMF Headphones too.

The early prototypes of P1 began its listening trial at various audio exhibitions  in April, 2017. Even though it had won overwhelming praises since, but we held back the production because we agreed that it fell short to full criteria to be a flagship product. Later following another 3 versions and 20 more prototypes under scrutiny of various modification and debugging, finally we created a satisfying P1 and initiate the production.

SOUNDAWARE® has spent a lot of work and time to develop P1. We tuned P1’s pre-amp referring to Accuphase C290V, it presents better music expression and reduction working with no matter the monitor speakers or domestic HIFI speaker systems.

The Soundaware P1 was provided on loan as part of the Head-Fi Soundaware P1 loaner program. I don’t get to keep it. My review has not been compensated. Views expressed are my own.

I’ve been party to some qualitative and quantitative analysis in my time. I think that the SOUNDAWARE P1 may measure better than the XIAUDIO Formula S. However, my qualitative listening repeatedly brought to the fore the difference in emotional presentation such that only a few songs in, my observations started to repeat themselves, meaning that there was nothing left to be gained from trialling further songs. The Formula S is lush and passionate. The P1 is clean and chaste. Both are excellent technical performers, but the Formula S pulls at my heart-strings and makes me want to stay with the music as long as I possibly can, makes me never want to let go, no matter how loudly other responsibilities call.

The P1 is masterful technically, but doesn’t hold my attention tonally with the Susvara. When I threw on the warmer Meze 99 Neo, it was a wonderful pairing that made the 99 Neo play above it’s price tag. I’d imagine that if you’ve got an emotive headphone that requires some juice, the SOUNDAWARE P1 is likely to be a perfect match as it brings every ounce of technical performance out of headphones, but if you are rocking cold cans, it’s probably not the way to go.