The Questyle QP2R is a nice-looking piece of kit, and I want to keep it that way, so I was already looking for a case for it before anybody offered me one to review. I looked at Dignis, but they were way expensive, unavailable, or both. I looked at Miter, but I wasn’t sure about the colour, or the kickstand. What was I going to do with a kickstand on a scroll-wheel operating system? Then Matt of SCV distribution told be he was getting in some Spyker Audio cases from a friend who used to work for Questyle in China. He let me pick the colour. I thought for sure it would be brown that I liked best, but there is a nice understated look to the navy blue (SCV website has terrible pictures, it’s navy, not grey-green-blue). I liked the white stitching on the back. After I’d happily gotten the Spyker, Miter asked if I’d like to review a case for the QP2R. I told him I wasn’t sure about the colour or the kickstand, but would see what I thought, if he was still interested. Now I’ve got two cases to review (and the QP2R, I have not forgotten).

This review won’t be in the normal format. The normal format makes no sense in a comparative review of two well-constructed assemblies of protein leather. 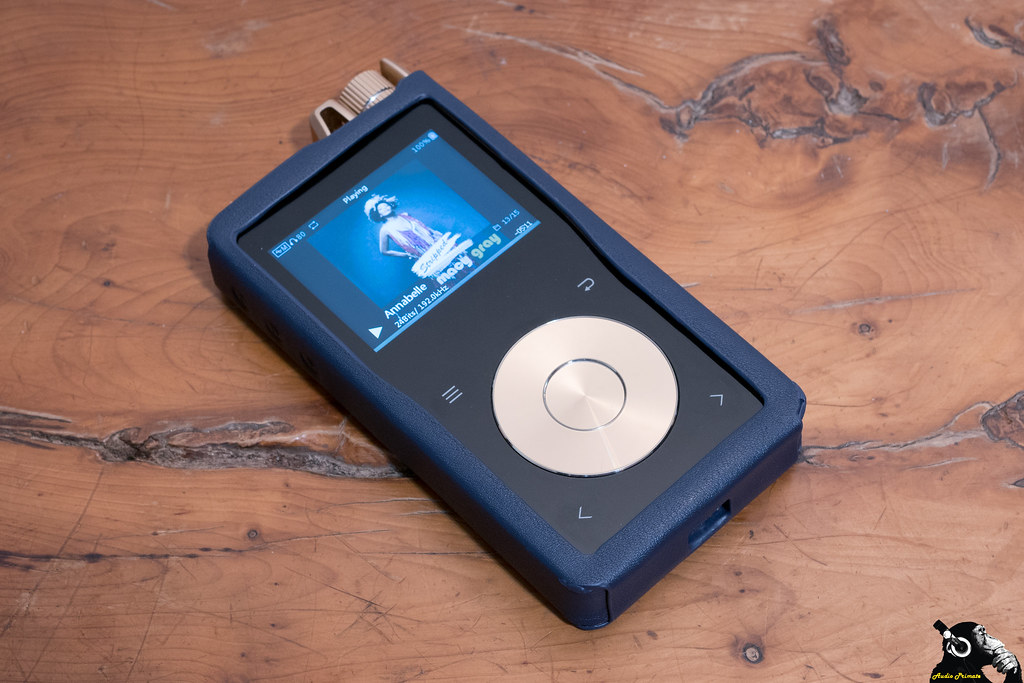 The Spyker Audio case came in a small, white, box with a foam brick holding the shape of the case inside the box. It might have held its shape without the foam, but who knows what would happen in transit. Could easily have a squashed box. The case is sturdy. It has a soft nice texture to the outside of the case with excellent button indentations that are labelled. The edges are sealed. The inside is a soft suede effect, with branding  inside sort of etched in. On the upper edge, the left side fully extends to cover the top curvature of the QP2R. There is a small cut-away to access the volume knob of the QP2R. The bottom edge has full wrap-around with no exposed corners. It also doesn’t allow access to the memory card slot, which will bother some. I don’t switch memory cards that often, and the case isn’t a pain to get off (use the bottom of a ball-point pen and push from the bottom hole, easy), so it doesn’t bother me. The case fits snug, but also isn’t too hard to get on or off. 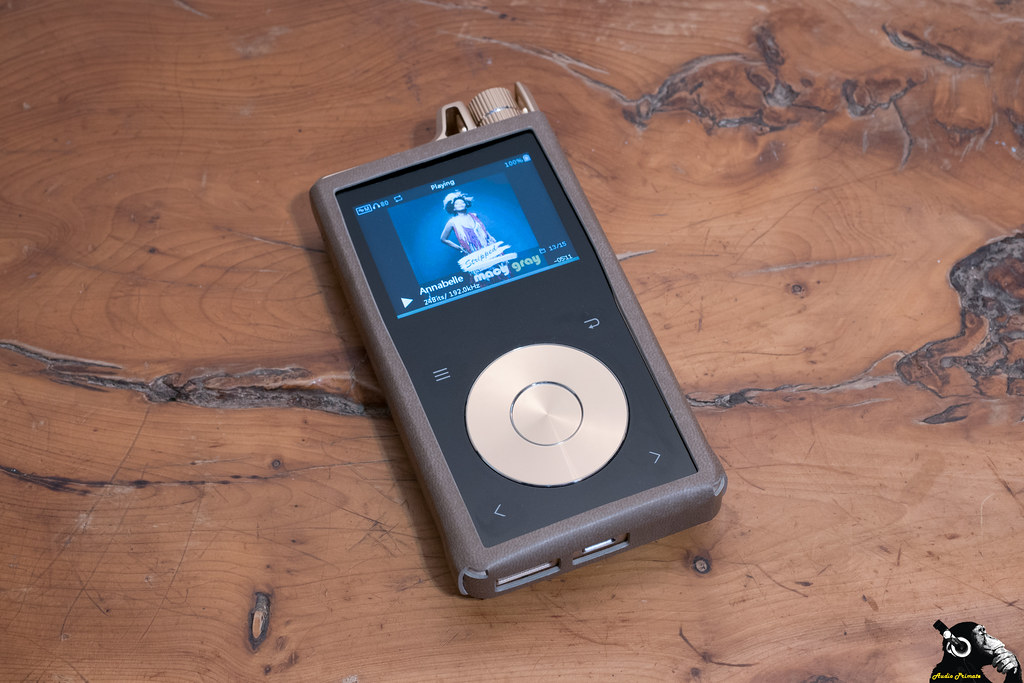 The Miter case came in a sturdy black rough linen textured box with a white fabric bag holding the case on the inside. The box has a clear label on the outside with a dot to show the colour of the case and the model. The box reminds a bit of a shoebox. It would be easy to find the right model in a stockroom. The case itself doesn’t have a foam block to hold its shape in transit. When I opened it looked a little droopy. 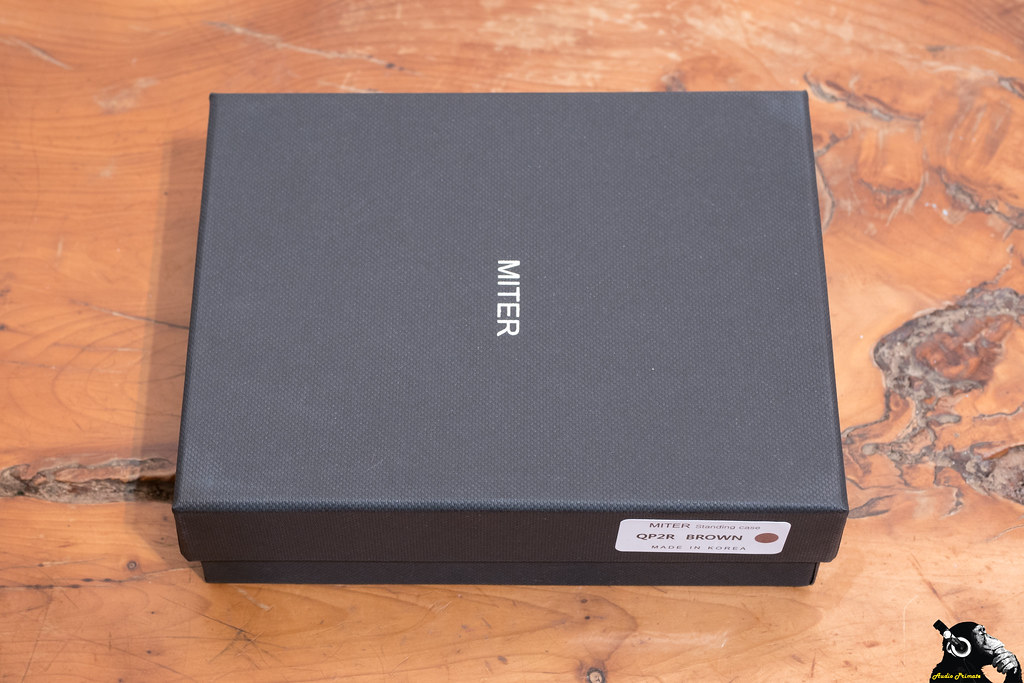 Miter is a case manufacturer out of Korea, where Dignis is also based. Both make nice cases. I wasn’t sure about the colour of brown for the QP2R case or the kickstand, but when it arrived and I got it on the player, it actually has a nice shade for the player and I like the kickstand. The kickstand looks awkward coming off the back of the case, but I actually found that in use it makes the scroll-wheel a bit easier for me to turn. The polished scroll wheel is the worst feature of the QP2R, so I’ll take help where I can get it. The kickstand has magnetic closure when not in use and fabric lining. Whilst I think the kickstand will be even more useful with a touch screen player, it actually ended up being a useful feature on the QP2R. I also like how the player looks standing at attention at my work desk. Hard working player. 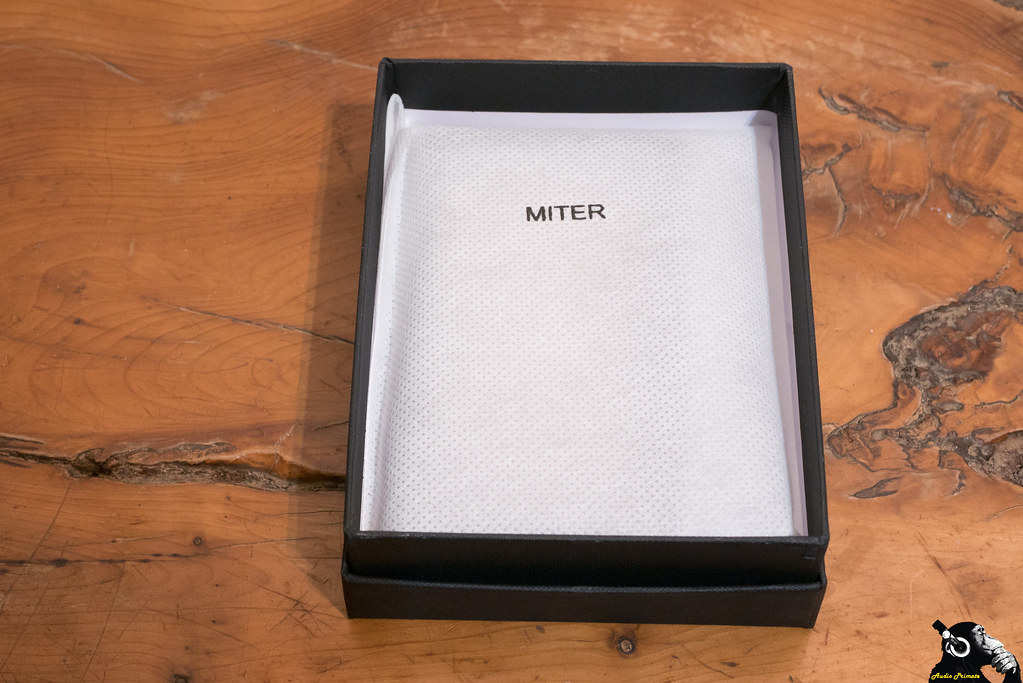 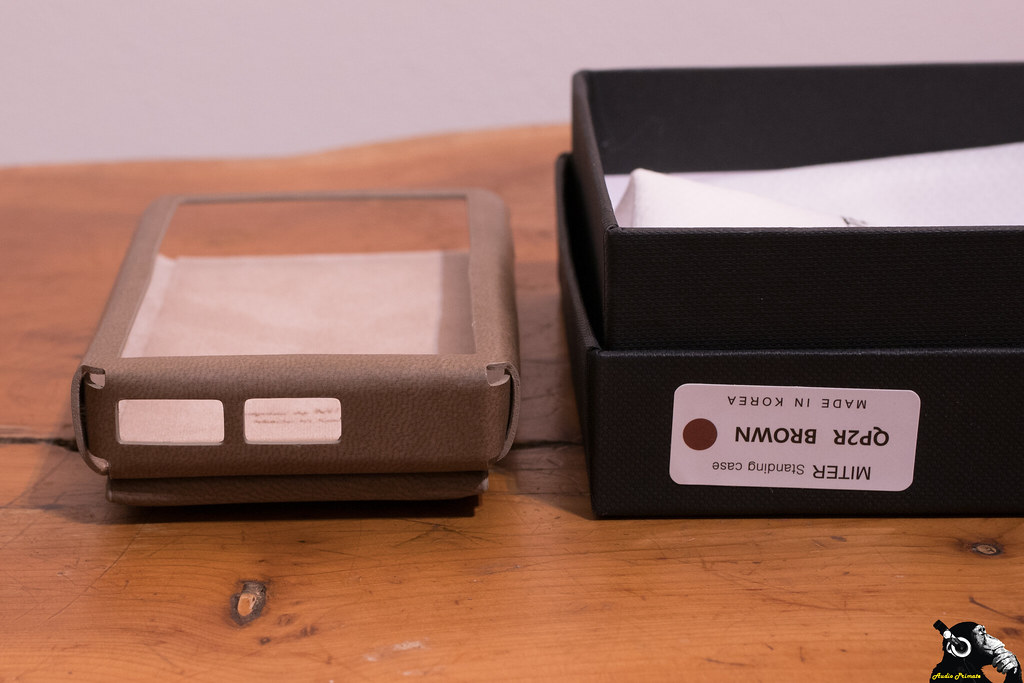 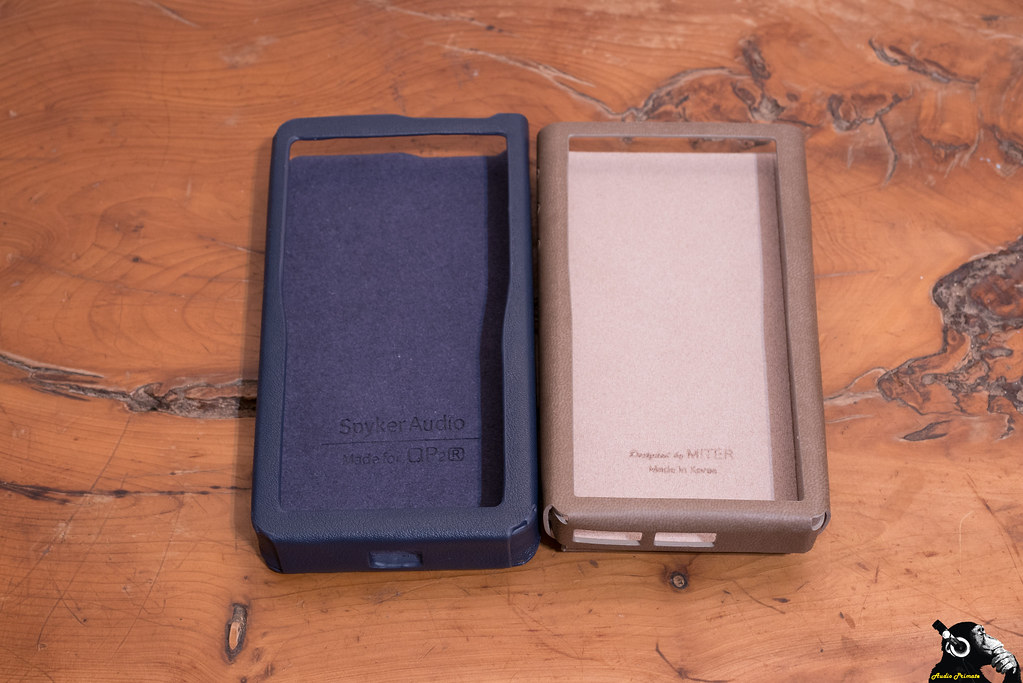 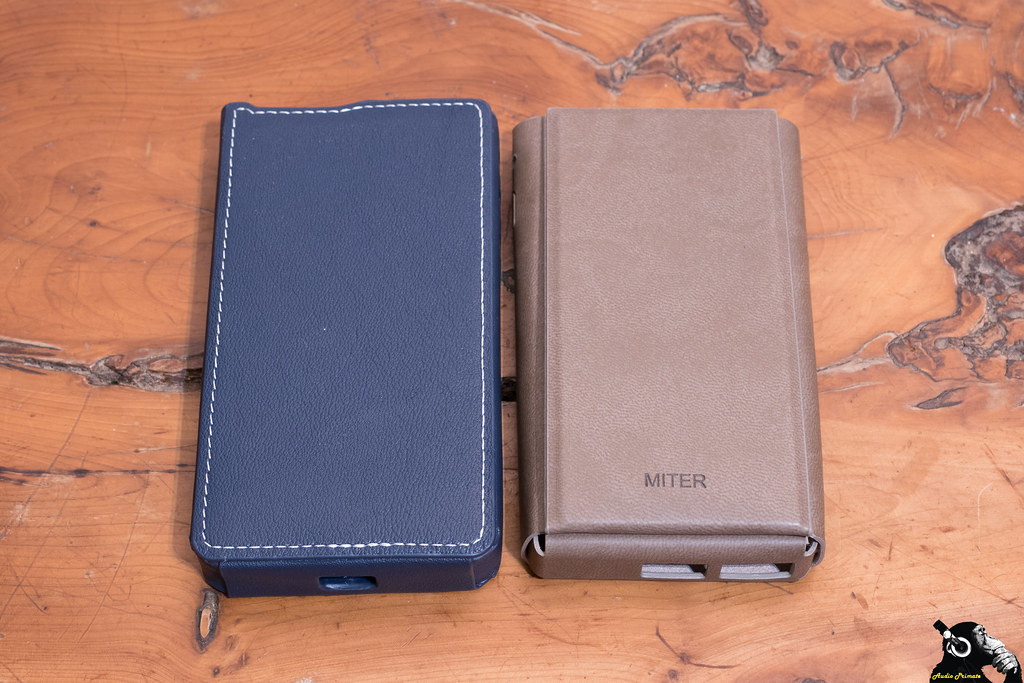 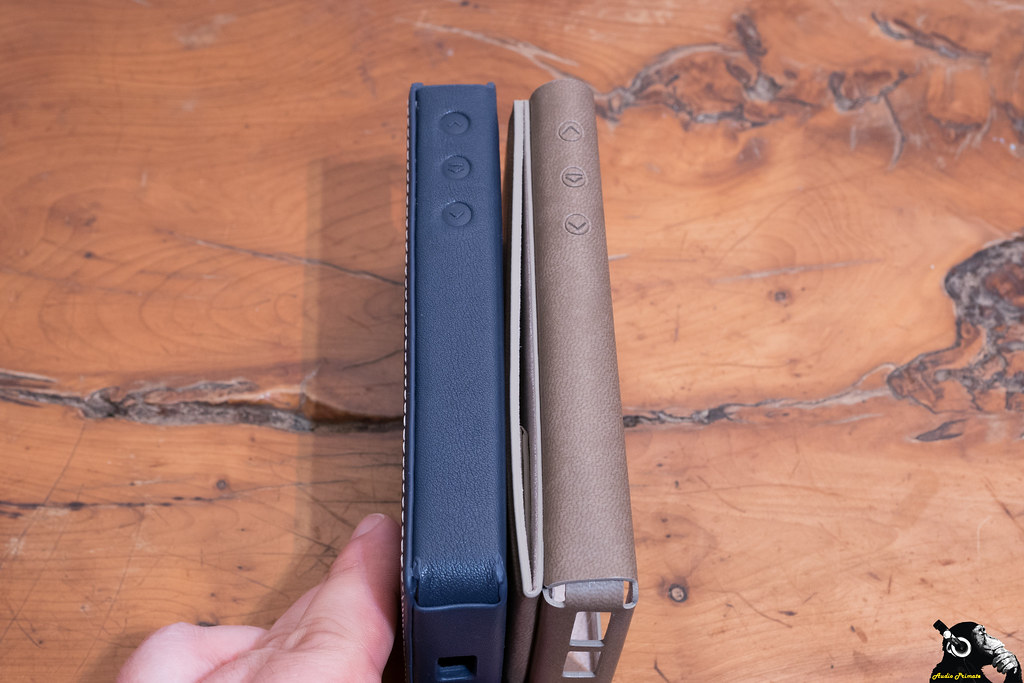 The Spyker QP2R case was provided free of charge by SCV distribution. The Miter QP2R case was provided to me free of charge by Miter. I do not have to return the unit, but am not free to sell it or give it away without express permission. I have received no compensation for this review and the thoughts contained within are my honest opinion. Thank you for supplying the review units.

Both players will have fans. I’m honestly a fan of both, and didn’t expect to be. The Miter kickstand won me over fairly quickly, but I like the look of the Spyker Audio case more. There’s just something about blue and gold together rather than tan and gold. The Spyker case is more rugged and the Miter case is more accessible (memory card). I’d say pick the one that fits your use but get a case for your QP2R. Keep it looking gold and sexy.