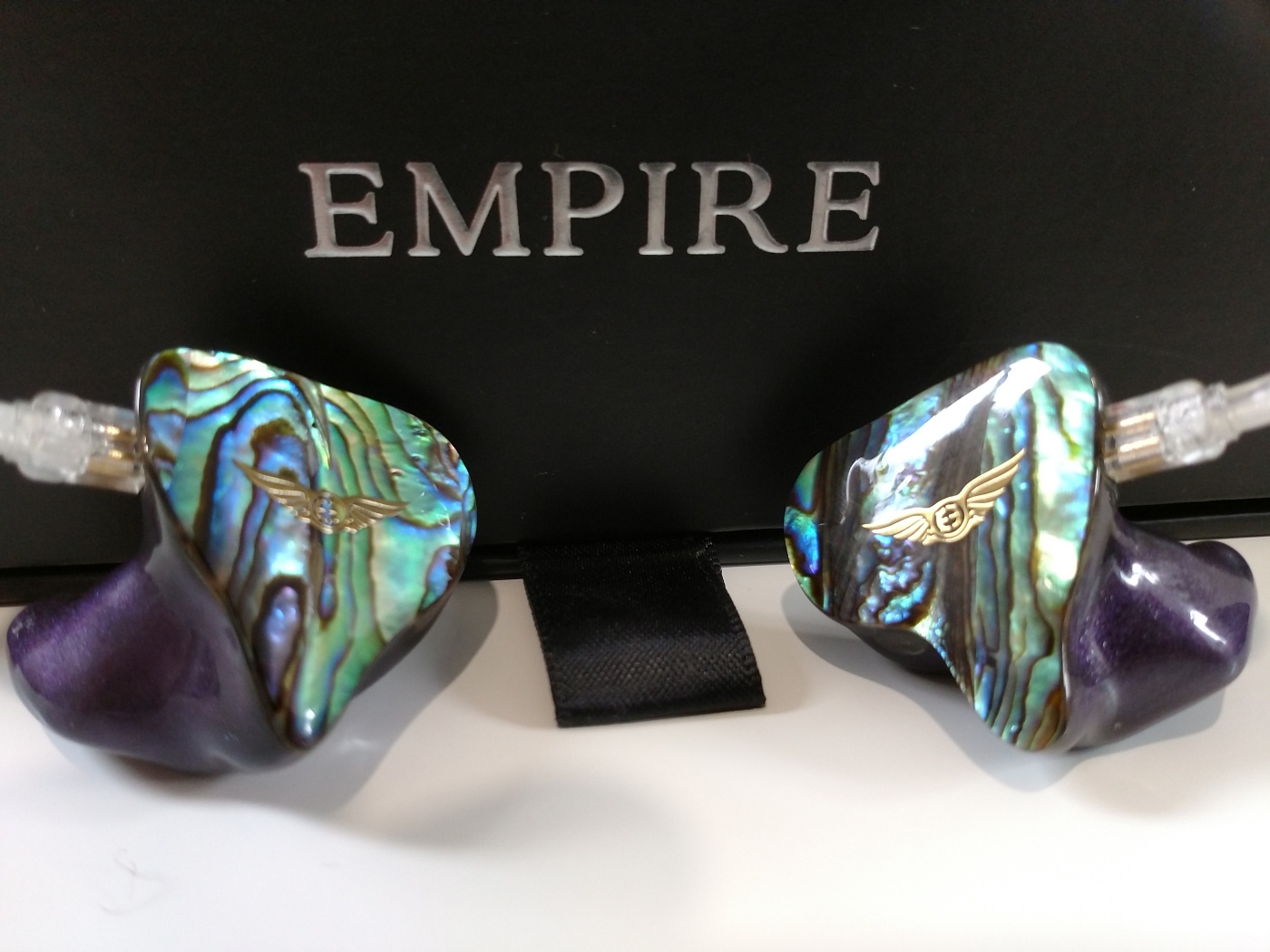 At the recent Canjam London expo, I had the privilege of spending some time with @Jack Vang and the team at Empire Ears, working my way through their current and unreleased IEM range. As an owner of the Zeus-XR, I was interested to find out what the rest of their lineup offered in terms of signature. After working through most of the range (plus some new prototypes and their “musicians range”, the Savage series), the one that captured me the most was the Athena. The mix of a slightly thicker and meatier sound and the trademark EE clarity in the mids and treble painted a very musical picture in my ears, so much so that I arranged to purchase a custom version for delivery about 3 weeks later.

After spending the last few days with them, my initial impressions on the sonics are below – a full review will be posted in a few weeks, once I’ve had time to properly get to grips with them.

The Athena are not at first listen a particularly flashy IEM, with a nicely agile but solid sounding lower end and a clean rather than sparkling treble. There is a nice sense of balance to the sound, without any immediate “wow” factor that usually kicks in with a more typical V shaped signature, or with something that carries more emphasis in one particular frequency range. There is something appealing about the warmth and balance of the presentation that kicks in, but this is a design that grows on you over time, rather than burning bright and then fading as the novelty wears off.

The overall tonality is a little warm, with a little lift in the bass (centred around the mid bass rather than sub-frequencies) and a nice emphasis on vocals. Treble is as clear as a tee-totaller’s skin, presenting a nicely smooth but detailed higher range without any nasty treble peaks or harshness. The warmth of the sound and slight push in the mids means that these aren’t an overly airy monitor, with a good sense of width along the x-axis, and decent depth, but no massive sense of space in the upper echelons of the sound.

In terms of bass, this has a bit more presence than the Zeus, with a nice sense of dynamism to the sound. Being an all-BA affair, the impact is never going to match up with the volume of air that a dynamic driver can move, but there is a nice sense of urgency and snap to the lower end, and bags of texture and detail. As mentioned, these are capable in the sub-bass but not outstanding, producing a faint rumble in the true depths rather than a earth-shaking roar. As with its big brother, drum sounds are rendered beautifully, with good imaging and an highly realistic tone – between the Athena and Zeus, I would say that Empire Ears have nailed the most realistic tom-tom sound reproduction I’ve yet heard (a very niche award, to be fair, but worth noting).

Much like the old Aurisonics ASG series, mids are something that Empire Ears have become reknowned for. The Athena doesn’t deviate from that, serving up a nice steaming dollop of sound in this frequency band that is a little forward, pretty highly resolving and just plain great sounding. Like the treble, the mids don’t scream detailing, but as you listen, plenty of nuance and audio plankton presents itself as the songs unfold. Clarity and smoothness are the order of the day, with a nice presence to electric guitar and rock music in general, and enough bite to keep things interesting where the track calls for it. For me, the vocals sit slightly in front of the other mid-band instrumentation (as they would on stage), and apart from the sense of resolution which isn’t normally available in the sort of dive-bar music venues I frequent, there is a nice “live” feel to the presentation for traditional guitar or band based music. The overall note presentation is a shade thicker than neutral, the Athena presenting a fairly large audio image in my ears, with a good sense of weight and a nice undercurrent of warmth running through it.

The treble is a little less emphasised than their big brother the Zeus, and in fact remind me of the Audioquest Nighthawk in execution. The treble isn’t sharpened or emphasised to accentuate micro-detail, but still has excellent resolution – the resolution is still there in the sound, but just feels a little less apparent until your brain adjusts to the signature. These aren’t a headphone for those fans of screaming crystalline crunch and blistering heat, but if you like your high end non-fatiguing and clear as a bell, you will be on to a winner here. I genuinely think you would have more chance of finding Lord Lucan than you would of finding sibilance on all but the harshest recorded tracks, but at the same tie the treble never feels blunt (once you have adjusted to it). It ticks one of my major tuning preferences, so I am definitely impressed with the sound here.

The Athena comes as stock with a nice stock braided cable in black, looking very much like an upgraded version of the standard “Plastics One” cable used across the CIEM industry. The eagle eyed among you will notice that it isn’t that cable that features in the pictures above. While the stock cable was perfectly fine for listening, as I am now running an Effect Audio Ares II+ on my Zeus-XR, I happened to have a perfectly good SPC upgrade cable that came with the EE flagship just sitting around unused. After some serious battling to get the stock cables removed (what do EE use to fit them into the sockets – a rocket launcher?!) I tried this cable out with the Athena to see if there was any appreciable sound difference. I must admit I’m very much on the fence on the benefits of cables in general, but have noticed a more pleasing tonality to the Zeus-XR with the Ares II+, and also prefer the sound of the Athena with the SPC upgrade. For me, it adds a shade more emphasis up top for an added perception of clarity, while still keeping the warmth and body, so balances out the sound a little better for my personal preferences.

The Athena are a mildly warm sounding monitor, but I actually found them pairing very well with one of my warmer sources (the Echobox Explorer) so far. The Opus #3 also runs very nicely with these, but I haven’t managed to spend much time with that pairing yet.

The final note in this section is on hiss. Yes, the Athena hiss. Yes, it’s in the same order of magnitude as the Zeus-XR (to my ears). No, once the music starts it doesn’t bother me in the slightest. If you have a particularly “hissy” source, that probably won’t pair too well with these IEMs if you are sensitive to that sort of thing. For most people, it certainly won’t be an issue.

Writing up impressions after just under a week with a set of gear is always interesting, as I’m sure some of the opinions expressed above will either change or be refined in my thoughts by the time I come to write a full review a few weeks down the road (my Zeus review has undergone a few revisions already since starting, and isn’t finished yet). One thing I know is that I am thoroughly enjoying the “mid-range” monitor from the EE Olympus line – it is musical rather than neutral, balanced rather than exaggerated and just damn fine sounding. If I hadn’t heard the Zeus, I would quite easily think this was a TOTL effort from a manufacturer, rather than the third model in their pecking order, such is the sense of accomplishment with the tuning.

The full review should be up in a few weeks, and I am very much looking forward to spending some serious time with these IEMs before that. For the price, these may not be the most neutral or “audiophile sounding” monitors out there (although they certainly won’t be lacking for technical prowess), but sometimes musicality is just more enjoyable than absolute technicality – it’s a line Campfire Audio tread well with their flagships, and having heard the Athena, I would say it’s something that Empire Ears can also do extremely well too.

One thought on “Empire Ears Athena – unboxing and initial impressions”