Cons: Didn’t feel like it pushed higher end cables to their limits, not as good as Micro iUSB3.0

The iPurifier2 was loaned to me along with the Micro iDAC2 by iFi for the purpose of this review, and I previously won an iFi Micro iUSB3.0 in the launch contest for the iUSB3.0. The opinions in this review are my honest opinions.

An earlier version of this review was posted on HeadFi.

Last year I won the iUSB3.0 in its launch contest. I have had the iUSB3.0 for about 6 months and have used it with several DACs: LH Labs Geek Out 1000, LH Labs Geek Out V2, Schiit Yggdrasil, LH Labs Geek Pulse X-Infinity, and the iFi Micro iDAC2. My observations in my iUSB3.0 review were that the iUSB3.0 had several effects: the noise floor is substantially lowered; instrument separation is increased; soundstage depth, width and height are increased; and the decay of notes is fuller and more natural. On reflection, I think most of these elements are related to the first element, lowering the noise floor. The Micro iUSB3.0 is a fantastic bit of kit, and I’m very glad to have won it, but when I’m traveling, it isn’t terribly portable. It needs two USB cables and a power socket to run, which adds up to a lot of gear to carry around. It also costs a pretty penny at around $400 (£329 when I won it). The honest folks at iFi say that you shouldn’t get an iUSB3.0 to use with a DAC that is less than $5000,and they are probably being sensible on that. 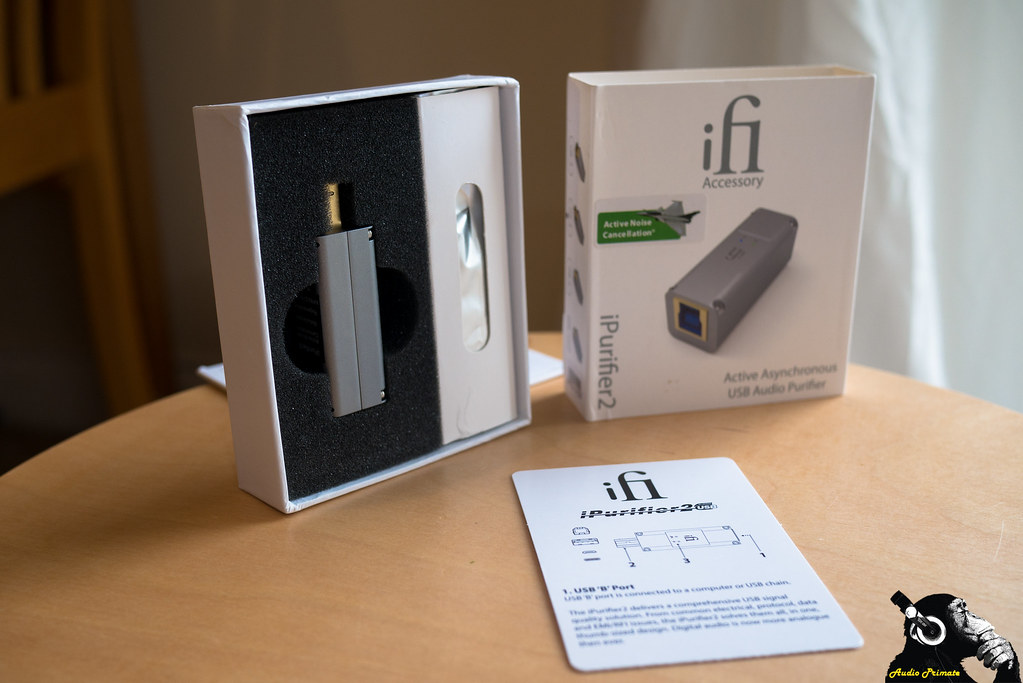 If your USB DAC is:

Hopefully this summary shows that if you have a <US$1k DAC, then the micro iUSB3.0 is overkill as unlikely to hear the additional performance.

I’ve used the iUSB3.0 with lesser DACs to good effect, but I didn’t pay for mine.  I also use two double ended USB cables that I got at big discounts through the LH Labs Geek Pulse IndieGoGo campaign (the campaign that less people are threatening to burn LH Labs down over).

The iPurifier2 has most of the technology in the Micro iUSB3.0, but is about ¼ the price and at most requires one USB cable and an adapter. The iPurifier2 comes in three varieties, all with USB3.0 female ends to insert a USB cable jack, but with different outputs: USB-A (female) for hooking up to the iFi Micro iDSD or a stick DAC like the Audioquest Dragonfly or Geek Out V2, USB-B for hooking up to most full-size DACs, USB-C for next generation devices, and USB-micro for many portable devices out there. The unit I received was the USB-B unit, which included USB-B (male) to USB-A (female) adaptor. The adaptor was appreciated as it allows wide usage. I was able to use the device with every DAC or DAP I own (most of us own a USB-micro cable for charging some electronic device).

Every person walking around this earth is biased, and I’m no different, so I’ve included a blurb about my particular flavour of bias below the spoiler. Read it if you want to.

The iPurifier2 is tiny and comes in a tiny box not much bigger than a pack of cards. The box includes a warranty card, instructions, the iPurifier2, and in the case of the iPurifier2 USB-B version, a USB-B (male) to USB-A (female) adaptor.  It will fit in a change pocket or small purse, but you’ll still need a USB cable. If you are carrying around a DAC, you’ve probably got room for the iPurifier2. 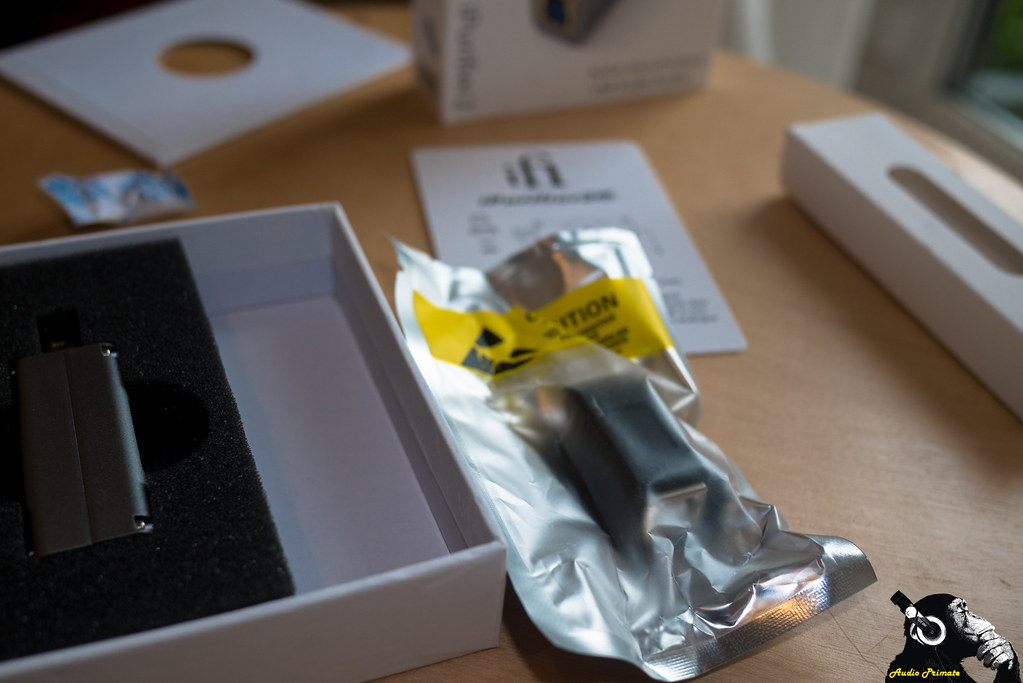 The iPurifier2 has two LEDs. When the device is receiving power but not plugged into a DAC both lights are blue. Plug the iPurifier2 into a DAC and the left light turns green.

Comparatively, the Micro iUSB3.0 has the following features (video from product launch), stats from iFi website:

The Micro iUSB3.0 is much larger. You’ll need two cables and you’ll probably want a case to carry it around. It has Micro in the name, but it is really inconvenient to move, especially when you consider that you will be carrying around the iPower and probably will be using two USB cables. I use the Micro iUSB3.0 plugged into my LH Labs Geek Pulse X-Infinity, which is a spectacular DAC and pre-amp with a middle of the road headphone amp, hooked up with two split power and data LH Labs Lightspeed 2g cables (I got the pair for <$250).

What I hear when I listen with the iPurifier2 is a blacker background, which lends to better instrument separation. Instruments have a more ‘suspended in space’ quality to them. Bass is fuller and drums have noticeably more kick. Notes have a more natural feel to them, a pleasant roundness. When listening to Kraftwerk – Kometenmelodie2 via the iDAC2 there was a slight smear to treble detail without the iPurifier2, adding it to the chain improved timing and made the treble more detailed. When listening to Mavis Staples – If It’s A Light I notice backing vocals more distinctly with the iPurifier2. The lead vocal has more definition and the bass is tighter and groovier. On Teddy Thompson’s cover of Leonard Cohen’s brilliant Tonight Will Be Fine, I hear the vocals just a hair cleaner and instrument spacing improved in the better blacker background. Others have proclaimed miracles about the expansion of sound stage. The iPurifier2 will not be keeping a drunken party going like a tiny British Jesus, but it will add some power to the cocktails already there. I didn’t hear miracles. I did hear improvement in depth, a little improvement in width and no discernible difference in height with the iPurifier2. The headphones I listened with were the Meze Audio 99 Classics, and my panty-hose modded Sennheiser HD600 (mod increases treble definition, removes some veil and improves soundstage, try it), and a variety of IEMs (Trinity Audio Atlas, 64Audio X2, Echobox Audio Finder X1). It may be that bigger differences in improvement on soundstage are had with higher end headphones, but I didn’t have any of those on hand, so I can only report my observations with what I have. The iPurifier2 made a nice difference when I listened with the generic USB3.0 cable supplied with the iUSB3.0, but when I upgraded cables to LH Labs Lightspeed 2G, I didn’t hear as much uptick in performance as I did with the Micro iUSB3.0.

The iUSB3.0 expands width a bit more and depth plainly more than the iPurifier2, but also gives a boost to height. When listening to Kraftwerk – Autobahn through 28 year old Mordaunt Short speakers I got for £20 off ebay,  the X-Infinity, and the Cambridge Audio Azur 540A the soundstage is as tall as my living room. It is spectacular. I didn’t get the same improvement with the iPurifier2. The iUSB3.0 also responds to higher end USB cables in a way that the iPurifier2 doesn’t. When I got the iUSB3.0, I had a Supra USB running between the computer and the Micro iUSB3.0 and a Lightspeed 2G cable to my Geek Out V2, replacing the Supra cable with the LH Labs Lightspeed 2G improved the treble definition. Switching between the cables on the iPurifier2 didn’t seem to have an effect. Hooking my portable hard-drive into the Micro iUSB3.0 also improved my sound a smidgeon. The sound was a little cleaner, more organic. Differences in sound stage were relatively easy to hear on the iUSB3.0 vs. the iPurifier2, but the change that I think most people will notice is the increased richness in the bass. The bass is fuller and richer on the iUSB3.0, it is a joy.

The equipment used for technical testing was as follows:

When I initially listened to my DACs fed through the iUSB3.0 I noticed that my music sounded louder. As many are aware, louder music generally sounds better to our perception, so a device that increases volume will be perceived to increase sound quality and bias our judgment. At the time I won the Micro iUSB3.0, I didn’t have a SPL meter, but this has since been remedied. I decided that the first test I would run in this review was to see if there were any differences in SPL measurements with the iDAC2 at the same volume between the iDAC2 alone, iDAC2 with iPurifier2 and iDAC2 with Micro iUSB3.0.

I did not use clamps to maintain fixed position of the headphone or SPL meter. All measurements were done by hand, which introduces additional potential for measurement error. The results of the testing are in the table below.

Given the table results above, it does not appear that there are any measurable differences between the iDAC2 alone and with USB devices. The small sample size caveat applies, but it is also the case that given the measurement error in hand measurement that further trials would have likely yielded little or no additional information. These results can be interpreted to mean that any perceived volume differences are due to elimination of noise on the signal, which is a tangible benefit to audio quality.

After I had already run this experiment, I was informed by iFi that it isn’t possible from an engineering perspective for the iPurifier or Micro iUSB3.0 to make the sound physically louder. This little experiment is a good example of why you can’t always trust your brain, while at the same time being an example of why you should trust your ears. That perceived louder sound is really about lowering the noise floor and creating a blacker background. It makes your music more dynamic, which is also what happens when you increase the volume. The brain doesn’t always make the right diagnosis of what the ears are hearing.

I’m a fan of the iPurifier2, but I’ve been spoiled on the much more expensive and more performance laden Micro iUSB3.0. Since my loan period began on the iPurifier2, the Nano iUSB3.0 has been released, bringing  much of the features of the Micro iUSB3.0 at half the price. I think that this is a good strategy for iFi, as all of these technologies work, but using the Micro iUSB3.0 with an inexpensive DAC is definitely overkill, albeit beautiful sounding overkill. I think iFi’s bracketing of prices has as much to do with the gear they expect people to be listening with as the price of the DAC that the iPurifier or iUSB3.0 device is feeding. Whatever your budget, iFi now has a device at a reasonable price to improve your USB DAC’s sound quality.

I think that the iPurifier2 is a great value. At $110 it is better value than basically any audio accessory you can buy in that range. It provides definite improvement in soundstage depth, lays down some tight and groovy bass, and improves note definition by improving the blackness of the background and preventing time smearing (as noted in Kometenmelodie2). The iPurifier2 is extremely portable, works universally, and provides noticeable improvements in audio quality.