For metal. I like speed and technical prowess. A while back I was surfing the metal section on Tidal and ran across a playlist about Djent. I had never heard of this staccato technical geekery–I’m all for geekery. 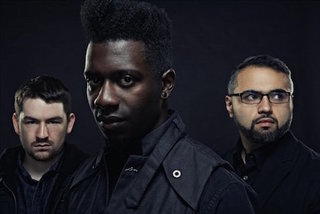 It started with just a chord and a band, and, whether they like it or not, it can be traced back to the Swedish band Meshuggah. The term ‘djent’ (pronounced ‘gent’), was allegedly first used by guitarist Fredrik Thordendal as he was describing a particular guitar sound: a hard picking of four strings (a power chord with an added 5th), distorted and palm-muted. The term was adopted by internet forums, and is now used as a name for the specific sound (arguably the most ‘correct’ usage), while also being used liberally to describe the scene surrounding around it, consisting of a new generation of progressive 21st century metal-makers – very often in the form of a single bedroom guitarist. With his solo compositions and sharing philosophy, Misha Mansoor (Periphery) was the one to take the djent movement out from the web and into the real world, when releasing his debut album. The liberal use of the term now grasps metal with heavy distorted tuned down guitars, (often palm muted), progressive polyrhythmic, technical complexity and commonly seven (or even up to ten-string) guitars. In this playlist we are not trying to collect the selected bands under the umbrella ‘djent’ as a genre term, which would probably make a lot of web forums go crazy. Instead, we have collected a bunch of great songs from bands associated with this delicious ‘djenty’ sound. If you are interested enough to still be reading this, you are likely familiar with a few of them already. Then you most likely will discover new bands to enjoy when listening through this list.

Since discovering the genre, I’ve used Animals as Leaders – Ka$cade as a test track for speed and complex instrumentation. I had a listen to the track playing on Tidal on the Sennheiser HE-1 system and I won’t lie, a smile cracked from ear to ear on my muppet face. I like the whole Joy of Motion album, it is exactly what it says on the tin and I’ll keep sharing. For a better review of that album than I can muster, check out angrymetalguy.