Pros:  I can listen to sensitive IEMs on the Questyle QP2R now without being swallowed by hiss, nice diamond dust feel and look to the casing, simple to use, lightweight, takes pressure off of 2.5mm jack

I’ve been wanting to get an iEMatch ever since the first one was released. I was surprised that iFi didn’t send me one to review, given how much we’ve worked together. I’ve got a few hiss monster DAPs in house, including my favourite DAP, the QP2R. Beyond the QP2R, the HiFiMAN SuperMini and the HiFiMAN MegaMini are hiss cannons. When iFi sent me the press release for the 2.5mm version of iEMatch, I had to get it. So, when I saw them at Sound & Vision 2018 in Bristol, I bought one on the spot. 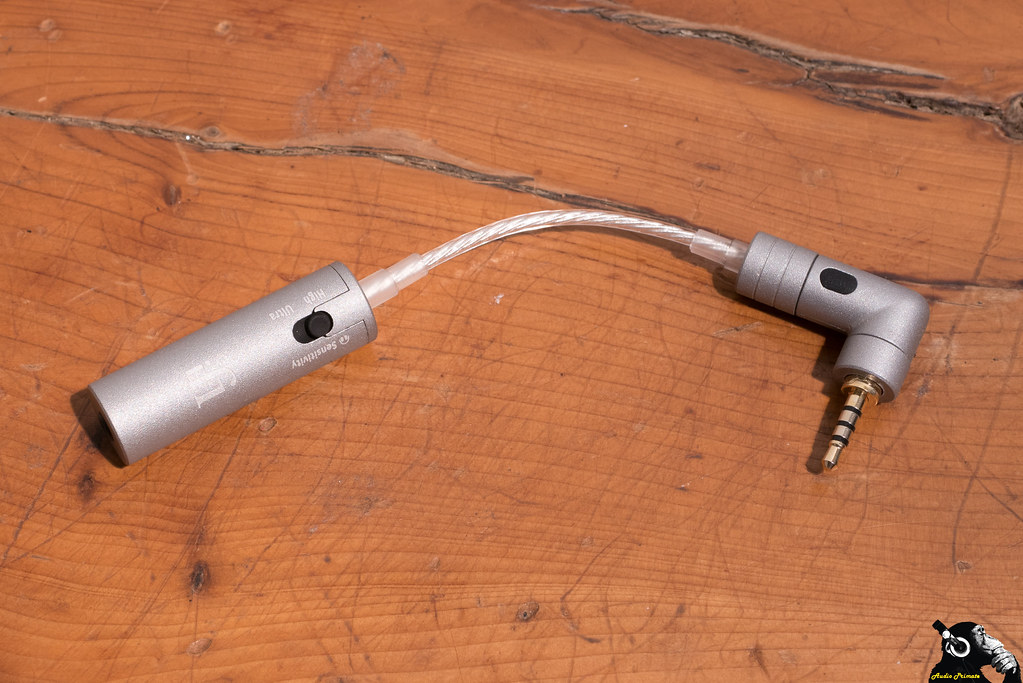 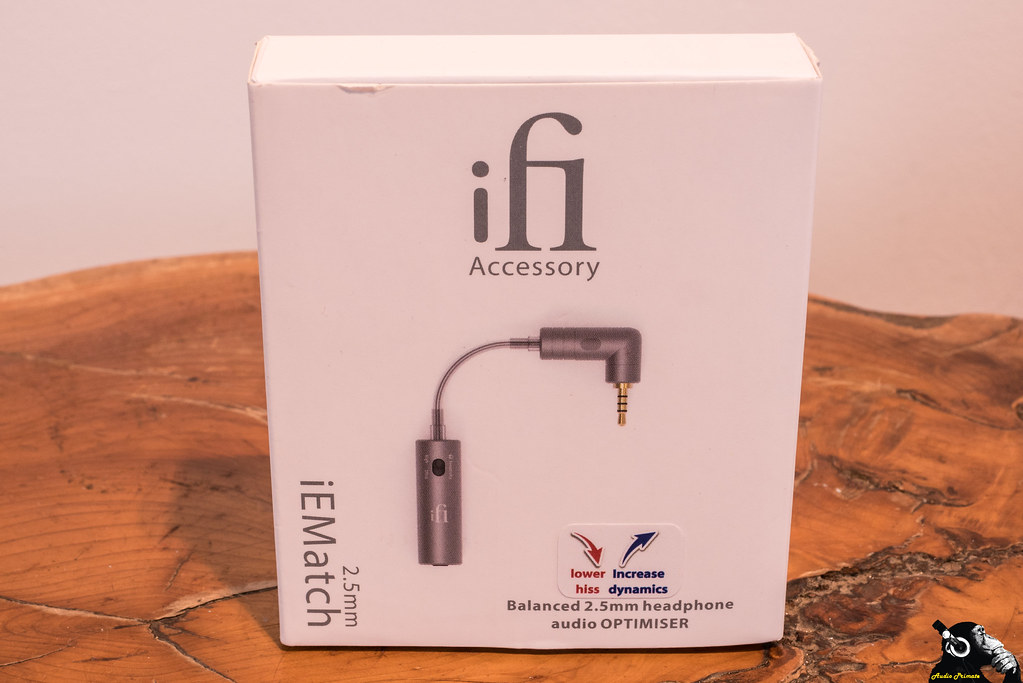 The box that the iEMatch2.5 comes in is iFi’s standard small item box. They use the same box for their Purifier series, and I have to imagine they use it for their Defender and other USB paraphernalia. Inside the box are the iEMatch2.5 with a formed slot cut out of the foam, a pair of earplugs, the cloth bag, and a tasty tasty silica packet. Mmmm anhydrous! Underneath the earplugs, there is a smiley face thank you. Also in the box are a conveniently sized and folded instruction manual and a warranty card. The box has all kinds of fancy pictures on the outside, which is standard for iFi. They are good with the graphic stuff. 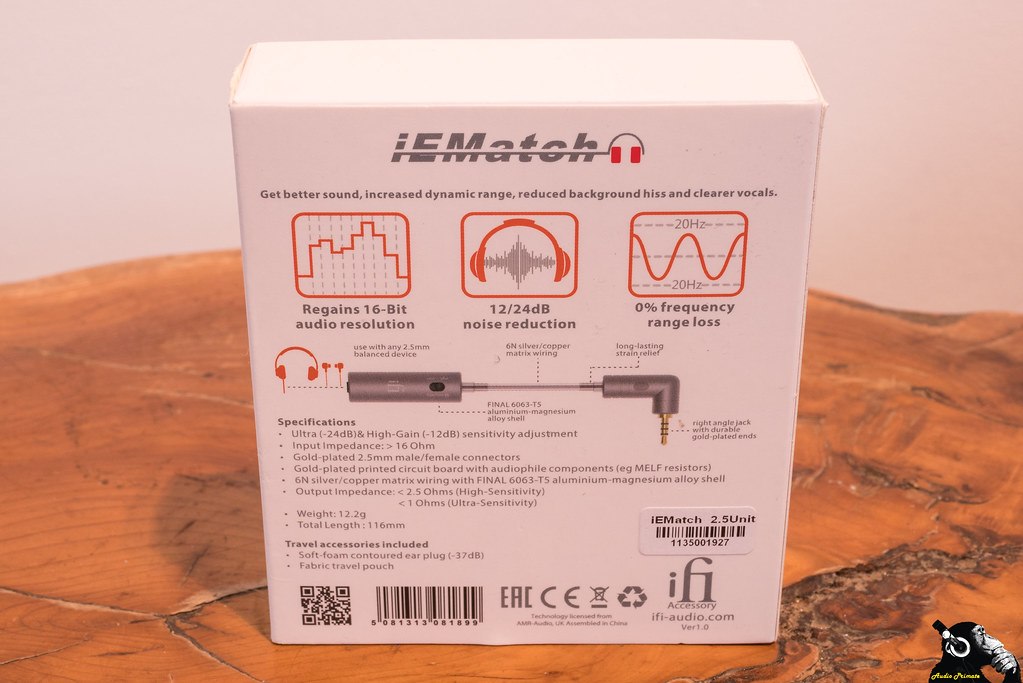 The iEMatch itself is tiny. I was able to easily fit it in side the Noble Encore Pelican hard case with a bulky aftermarket cable. It’s really a life-saver with the Noble Encore.

The iEMatch2.5 has a lower output impedance than the version built into the iDSD Nano Black Label (under 1Ω versus 4Ω) but the same as the original iEMatch. In practice, what this means is that I don’t notice any colouration of the sound signature on the Noble Encore with the iEMatch2.5, but I do with the iDSD Nano Black Label. I get to listen with the best DAP I have in house, which is excellent. With the Noble Encore, I only have ever needed to use the High sensitivity setting, but if you are an Andromeda fan, I’d wager the Ultra sensitivity setting would have you covered. 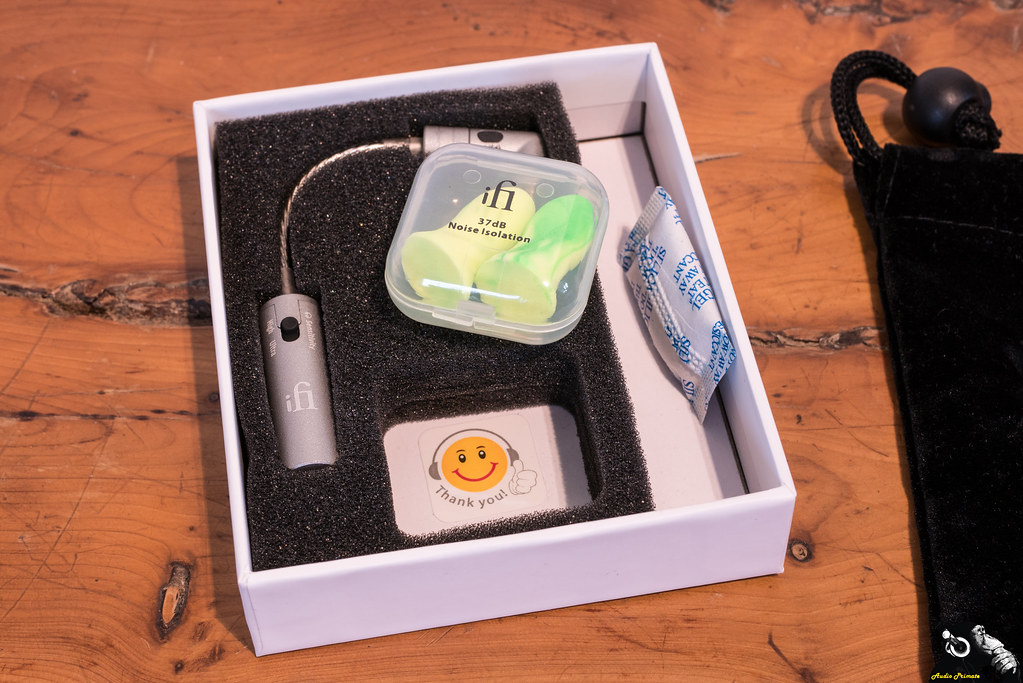 One thing that I noted was that with the Questyle QP2R, the Ultra setting on the iEMatch was a bad idea, as the volume had to be turned up too high and it caused a little clipping. So you may not be able to use the iEMatch2.5 with every IEM source combination. If it sounds wrong and you have to jack the volume knob up to insane levels, stop. Use your sense.

On the iEMatch2.5, the 2.5mm jack plug has a collar. It has been my observation that 2.5mm plugs are very brittle, which is one of the reasons that I’m all gung-ho for 4.4mm balanced jack plugs to take over the DAP world (my 4.4 make sure all y’all kids don’t grow, to homophone a great one). The best way to strengthen a 2.5mm jack plug is increase the contact area around the plug. Using a collar decreases this area and makes the plug vulnerable. Similarly, the end your aftermarket cable plugs into is not flush with the magnesium body of the iEMatch2.5 so also has a point of vulnerability that could have been mitigated. That said, moving your aftermarket cable plug away from the 2.5mm jack on the DAP reduces the amount of pressure, thus reducing the likelihood of a busted jack plug on your [expensive] aftermarket cable. This issue is why I docked the build quality 0.5 points.

I only have one other gripe, and that is the price differential between the standard iEMatch, and the iEMatch2.5. The regular iEMatch can be had for around $50. I think this is actually a more appropriate price, which is why I had to dock the value 0.5 points.

This was awfully close to being my first ever perfect 5 review. If I’d beta tested this, it would have got the 5 star rating, because I would have addressed the only issues. My cons would then read: none.

I acknowledge that I bought the iEMatch my own darn self. No acknowledgment necessary. I got a show discount.

The iFi iEMatch is a hissbusting miracle worker in a diamond-dusted magnesium suit. It’s worth every penny. Buy it! 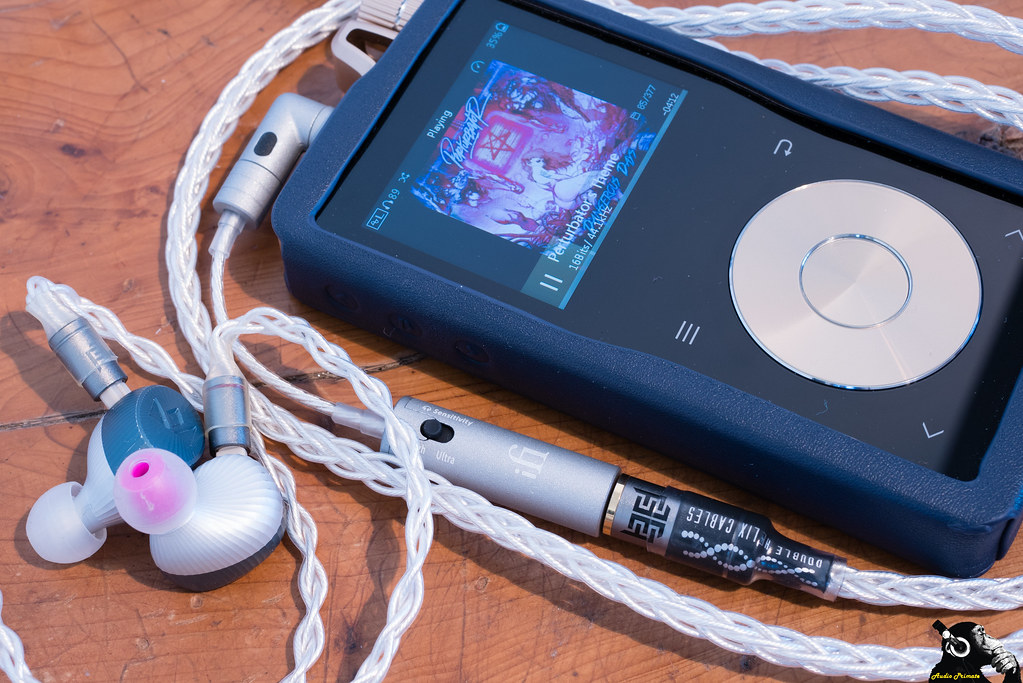