Cons: Stage depth not as great as my other amps, some details and natural edges are smoothed over

Thanks Arcam of Cambridge for including me in a UK tour in exchange for my honest opinion. This review has been adapted from a review originally posted on HeadFi.

The more I look at the audio industry, the more amazed I am at the number of enterprising and innovative folks getting into the market. Arcam isn’t one of those companies. It doesn’t mean that they can’t be innovative, but they’ve been around too long to be called a new firm. Over 40 years in operation out of Cambridge, England puts Arcam in pretty rarefied company.

The Arcam rHead comes in a briefcase size box, which was unexpected to me. For some reason I pictured the rHead being a big beefy amplifier. It isn’t, but it is a little beefy amplifier. The rHead can be held in hand, and has the heft of a brick at a riot. I’m not suggesting lobbing it through a Starbucks window, but anarchists with less wits than arm action could easily mistake it for a brick. The amp feels solid and made to last. I have no doubt that the rHead is not made to break, or designed for built-in obsolescence like most of the electronic gear of this our disposable age. I believe them when they say it will last for 20 years.

The rHead has a couple single-ended inputs front and left on the fascia, one for 3.5mm headphone jacks and one for 6.3mm jacks. The sockets have a nice solid snap to them when putting headphones in. On the rear of the unit we find one set of balanced XLR inputs and one set of RCA inputs. There are no outputs here, so we won’t be using this as a pre-amp, like some other headphone amplifiers. Also on the back we find a switch to select which input we are using, a power switch and the jack for the worldwide wall wart that comes included. The wall wart has interchangeable plugs and comes with UK, EU, USA, and Australia plugs—very useful. There is also a cheap set of RCA cables, which means you can hook this up just about instantly, so long as you’ve got your source ready to go.

The manufacturer blurb makes some points about construction materials, but I’m not buying that metal film resistors magically produce the lowest distortion. The lingo seems to just be telling me what they put in it and then throwing superlative spaghetti at my ears and hoping some of it will stick. I don’t much dig spaghetti in my ears.

The rHead box is so small that I was able to fit it in my backpack and take it to CanJam London. I hope some folks had a listen. Arcam did miss a trick on their box design, though. Given the size of the box, and the portability of the amplifier, having a box with a handle would be incredibly sensible. Also, the box is sealed by a round sticker, instead of a central fold/insert flap. If a handle and fold insert flap for closing the box were included, the amp would be much easier to use portably. It would be much better than what I usually carry in a briefcase form factor—breathmints and scribbled interview prep notes.

The volume knob feels solid, but nothing to make a youtube channel about. 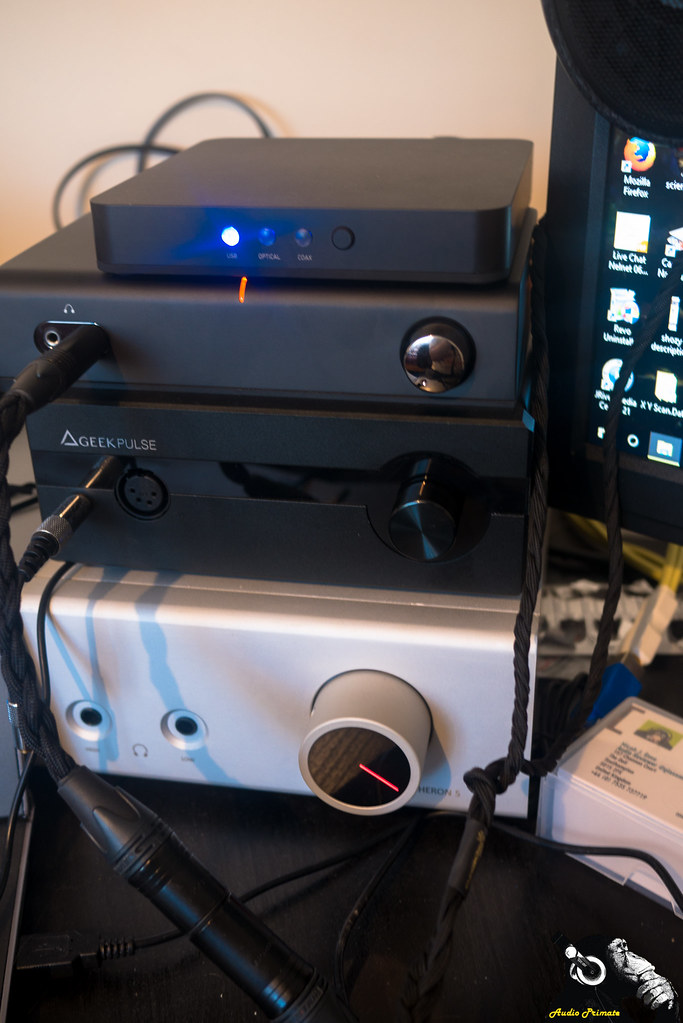 The Arcam rHead has a smooth musical presentation. It is fairly clear, with good, but not great detail. The amp is neutral, with no frequencies emphasized over others, which is how it should be. Good on ya, Arcam. Soundstage is good, but not tops among the competitors today. The sound signature is overall, a bit forward.

When listening with the HD600, there is plenty of power to drive it, but the HD600 likes even more to get the bass to come up a bit. I found myself with the volume at about 65%  to 75% on the volume knob at most times.

With regards to the claims made about the sound signature from Arcam’s UK distributor, I did compare the rHead against amplifiers at twice the price, and it wasn’t as good, but it did fairly well. I don’t buy the claim that people listening to other amps are used to more bite because of more distortion. When listening to the LH Labs X-Infinity and the Airist Audio Heron 5, it was the clarity that made them both place ahead of the rHead. It isn’t an insult to not beat the X-Infinity amp, as the DAC/Amp combo that is the X-Infinity supposedly retails for $3000—I paid nowhere near that. Similarly, the rHead competes with Airist Audio Heron 5. The claim that it gets more musical as you listen to it is simply not true. What Arcam was describing was brain burn-in. The amp isn’t changing, your perception of the amp is changing.

Before doing any comparisons, I did my best to volume match the different amplifiers using the HD600, a cheap SPL meter, and a pen to record the volume level necessary on my X-Infinity. Volume was matched at 78 dB. The signal chain always had my computer feeding my LH Labs X-Infinity ( via LH Labs Lightspeed 2G double-ended USB cable), which then fed the Airist Audio Heron 5, using singled ended outputs and a pair of Atlas Integra interconnects, and the Arcam rHead, which was fed with Van Damme XKE Quad XLR pro audio cables. I recognize that this is not an identical setup, but my observance has been that the sound from XLRs on the X-Infinity is slightly better than the sound from RCA, and having both amps hooked up simultaneously allowed rapid, but not instant switching, between all three headphone amplifiers thus minimising audio memory loss and maximising the speed of comparisons. The X-Infinity includes a pre-amplifier, and both headphone amps have their own volume controls, so whilst listening to the headphone amps I maxed the volume on the X-Infinity. The X-Infinity was set on high gain. Both the rHead and the Heron 5 were set once and left. When switching in between any amp and the X-Infinity, the X-Infinity volume had to be reset to the correct level. The HD600 was played single ended from both the rHead and Heron 5, but played balanced from the X-Infinity—I’ve never found the X-Infinity’s single ended headphone amplification to really satisfy me.

My playlist for comparisons today included the following:

On Michael Jackson – Billie Jean the rHead had a smooth treble presentation, good impact on drums and a more lively feel compared to the X-Infinity. Stage width was a smidge wider on the rHead, but with less depth and detail than the X-Infinity. On violins, the X-Infinity had a bit more natural timbre. After one track it was hard to tell the difference between the amps. Differences were subtle and may not be evident to all listeners.

Late Home Tonight, part 1 puts a bit more differentiation in play  between the rHead and X-Infinity. The rHead is smoother, but less detailed and with less depth in the stage. The X-Infinity has more subtle instrument placement than the rHead.

Marvin Gaye sounds wonderful on both amps, but the track has impressive depth on the X-Infinity and good depth on the rHead. I think the narrower depth enhances drum impact on the rHead, but at the cost of more accurate instrument placement.

Adding the Heron 5 to the mix of comparators allows firmer comparison of the X-Infinity and the rHead. On Massive Attack – Teardrop the rHead gives a nice snappy drum presentation, good treble on the strings, a bit of forwardness on the mids, and good bass grip. The X-Infinity has the best imaging, but the least bass grip. The Airist Audio Heron 5 has excellent grip and texture, and a bigger soundstage than either the rHead and X-Infinity (especially on depth). The Airist Audio Heron 5 is like getting the best of all worlds, but with a very slightly smoother sound than the X-Infinity. When listening to Eagles – Hotel California (DCC Gold), I only have one more observation: the emotional content on the Heron 5 surpasses the rHead.

Further listening only confirmed the findings of the previous tracks. It is much like in qualitative research, often a few interviews with patients gives you most of what you will find, the rest of the patients serve as confirmation. The rHead is the smoothest, with the least detail and stage depth. It has good sub-bass rumble, but both the X-Infinity and the Heron 5 can get the sub rolling, too. The X-Infinity is the most detailed but doesn’t have the full texture, emotional notions, good vibrations or satisfaction of the Heron 5. The Heron 5 lets the DAC speak, clearly, intelligently, dripping with appeal.

I tried the Arcam rHead with other headphones ranging from 16 ohm IEMs to 32 ohm headphones and it did wonderfully with all comers. These play nice with whatever you throw at them.

The story of audio is told in specs and stat-sheets as well as marketing lingo, reviewer critiques and homages. Sometimes a manufacturer’s description is a superfluous ball of superlatives. If they’re doing a good job the information they provide won’t just be a flash-zip-bang advertisement to go with your morning cereal and internet browse—I do this every day before I go to work, alas the newspaper is dead in my generation.

The Arcam rHead is a powerful amp with a clear neutral sound. Compared to other amps I have on hand it is smoother, with less detail and less stage depth. It is, true to Arcam’s claims, an amp that is always musical, and built to last. The build quality of the amp is the most substantial of any amplifier I’ve played with among it’s competitors.

When I got the amp on loan, a HeadFi friend asked me if he should get one for his nephew who is heading off to college. I told him his nephew is a lucky so and so and that he’d be pretty chuffed to get this amp, no matter what part of the world he is headed to. This amp is perfect for a college student looking for an audiophile headphone amp to impress all their friends, take up next to no space, and last through a dozen crazy hectic moves from house to house like nothing happened. This amplifier is absolutely built like a tank and should last your college student until they are sending their child off to whatever type of education kids will be sent off to in 25 years.

2 thoughts on “Arcam rHead: a solid black brick of audio goodness worth building on”